Fitbit Blaze versus Apple Watch: A to Z Comparison [Here is the Winner]

If you are confused about Fitbit Blaze or Apple Watch which fits right for your wrist, then you can get some ideas about both of them in this article. 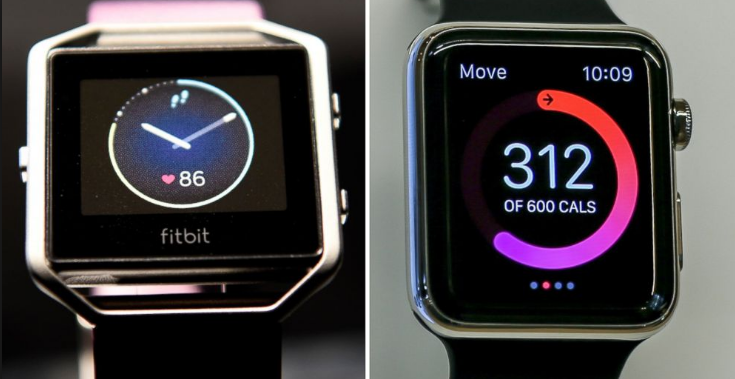 Both the Apple watch and the Fitbiz Blaze are top smartwatch brand but there are a lot of differences among them and let’s see what all are they.

Apple Watch worth around $350 and they are capable of interacting with iPhone and has facilities like smartwatch and fitness tracking. The design of the Apple is more stylish, comfortable and four collections with two case sizes of 38mm (1.5inch) and 42mm (1.7 inch) are available. There are regular Apple watch as well as the Apple watch sports edition.

It has various colors and band options and It run for 1 day. It contains inbuilt heart beat sensor which uses visible light LEDs and infrared and also contains 8GB storage capacity.  Apple watch contains more notification compared to FITBIT such as

It is highly compatible with iPhone 5. Apple watch versions are

Using Bluetooth we can connect with our iPhone and it can be charge by inductive charger. It doesn’t have inbuilt GPS chip. Apple watches supports for Facebook, Twitter, WhatsApp and also supports for some other apps also which support in IPhone. It also have some inbuilt app such as World clock, Timer, Alarm Music, Stocks, Stop watch, Photos, Mail, Maps, Friends, Whether , Phone, Remote, Workout, Camera Remote, Passbook, Apple pay, Messages, Activity. This shows that you can access your multiple things at in your wrist. It have water proof feature with it . The aim of Apple watch is to minimize the activities in phone.

Fitbit Blaze is a fitness tracker which is also a watch.

Apple watch is a mini computer which is also a fitness tracker.

Fitbit worth of $ 130 consists of the option to integrate with with any smartphone. It is a fitness tracking device and a basic watch. The design of the Fitbit is little broad compared to apple and run for atleast 3.5 days. Fitbit is more concentrate on activity tracking features such as steps, calories, water intake, sleep tracking features, heart rate, distance, calories burned, floors climbed, etc… It is connect with GPS but it only works if you have your phone with you otherwise it acts as only fitness tracker. It works using battery and it connect with MAC OS. Fitbit android app supports for many android devices such as HTC, Nexus series, Moto series, LG,  etc.. Fitbit contains limited notification other than Activities such as

Fitbit contains some quality issues such as wrist breaking or separating.  It contains radar, chip chick, men’s fitness, women’s running time, shape, outside, popsugar etc.
That it concludes if you want to go with purely in fitness means you can buy the Fitbit watch otherwise you want more computer activities in your wrist means go for Apple watch but it sounds higher rate than Fitbit.